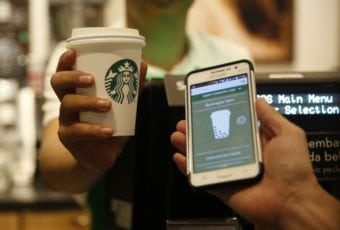 If you can believe it, the Starbucks mobile app is used more frequently than Apple or Google Pay. eMarketer estimates that in 2018, 23.4 million users used the Starbucks mobile app for payments versus 22 million for Apple Pay and 11.1 million Google Pay. It’s amazing to see how far mobile payments have come with the number of apps accepting in-app pay growing exponentially.

eMarketer analyst Cindy Liu called the Starbucks app “one of the bigger success stories” in mobile payments. So, why is it so successful? Part of the reason might be because of its loyalty and reward program. While customers can easily pay at Starbucks with Apple Pay, the choice to pay with the Starbucks app is an easy choice, since customers can save time and money at the register while racking up rewards and earning free drinks and food.

Many other companies have seen the success of Starbucks and are joining suit, such as Walmart, who has integrated mobile payments into their app for similar reasons. With the number of companies and apps growing, it is clear that making purchases on mobile devices is here to stay. eMarketer also expects Starbucks to maintain their lead well into 2022, with the number of users rising to 29.8 million, compared to 27.5 million users on Apple Pay and 14.9 million on Google Pay.

If you want to start accepting mobile payments with Apple or Google, get in touch me with me here on LinkedIn. At HiTech, we also offer custom integrations for business, so that if you’re building an app, you can integrate to accept Apple Pay and other mobile payment options.